Something very strange has been going on around my home for the last few weeks.

I’ve only just begun to unravel the oddity of it. Maybe it’s not abnormal and noteworthy. Maybe others out there will have experienced the same type of phenomenon.

But I doubt it.

I call it Avian Reciprocity.

But I should start at the beginning and make a full confession of it.

I am one of those regrettable people who feed wildlife. I don’t lure them. I only offer sustenance if they come asking. They are the instigators. And if they didn’t accost me with such irresistible, imploring eyes, I wouldn’t cave. I don’t do it every day. Only when the animals are in need and make a point of coming to my door.

Birds are different, though. Supplementing their diets is sanctioned, judging by the proliferation of paraphernalia for sale. So I put out birdfeeders and suet baskets. That’s fine for the smaller songbirds, but, being fair-minded, I can’t ignore their larger cousins.

It started innocently enough. I dislike waste, so every morning I take the dried, crusted, uneaten bits of canned cat food and scrape them onto the beach outside my door. The little pile of leavings draws immediate attention from the gulls.

But now, it’s drawing their gratitude as well.

It started with a loud, alarming CRACK! as something hit the roof of my house. I went to investigate, expecting a branch or an oversized pinecone to have fallen from one of the towering evergreens that surround me. Nothing. 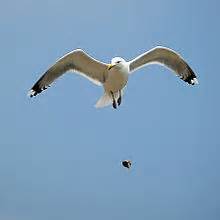 It wasn’t until I was cleaning out the gutters that I found them. Clams. Dead, but presumably alive when they had landed on my roof.

I became suspicious. I went undercover. Covert surveillance revealed the culprit. A seagull. Bringing me a clam for every serving of cat food left on the beach.

And now, the ante has been upped. It might be because I added a little kibble to the canned food this morning. I saw the seagull deliver payment. I can see it from where I sit typing.

There’s a large, dismembered crab claw on the doorstep.

And the birds are watching…