It’s a hot-button issue and everyone says to stay away from it. But I won’t. If you don’t like what you read, too bad. My blog; my right. My circus; my monkeys.

What happened in Ferguson was terrible. Heart-rending. No matter which side you fall on, when you consider a death that might have been avoided had things fallen out differently, you want to scream to the heavens and dig your nails into the dirt and shriek your throat raw. Your heart breaks for the life lost and the lives ruined.

But what I heard last night turned my rage up; turned it molten.

A Washington state politician who I can only guess was throwing her hat into the ring to further her own agenda when it comes to gathering a larger constituency, went in a direction that I just have to call out.

I wish I could find the video clip, but I can’t. So I’ll have to paraphrase.

Buffeted by the passionate crowd surrounding her, she cried out that children were dying everywhere because of police. The tragic example she provided was a twelve-year-old boy who had been shot and killed when he pulled out a toy…but genuine-looking…gun and aimed it at an officer.

“I don’t want to have to teach my children to walk around with their hands raised!” she bleated.

And that’s where the match hit the fuel and my anger went through the roof.

How about you teach your kid NOT to pull a weapon on a cop, lady?

How about you teach your kid NOT to attack or threaten anyone carrying a gun?

How about you do that right along with teaching your kid to look both ways before he crosses the street?

Or does the logic escape you?

More and more in local news there are stories about home invaders and burglars getting shot and killed when the people they’re threatening react by using deadly force. Every time I hear of one, I think ‘When are they going to get it through their thick heads that there are consequences for their actions?’ It’s risky to steal, or break and enter, or pull a gun, or confront an armed man. It could get you killed.

So, Miss Politician, please teach your children what they should do to avoid having to put their hands up in the first place.

My circus. My monkeys. My opinion. 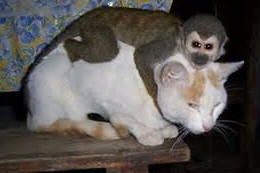