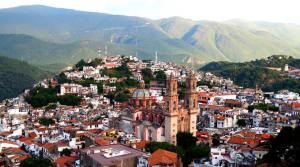 He turned away, back bent under a large basket of avocados, muttering to himself. I caught the words “gringa” and “loca.”

I’d been traveling all summer, trying to make the most of what I saw as my final break before entering the “real world” where I’d have to find a job and settle down to the business of being an adult, for once and for all, until death do I part. To tell the truth, I was a little reluctant and a little scared. So I took off for Mexico as soon as graduation was over.

So far, it had been great. There had been some culture shock. I had learned that girls who get pinched in the market place aren’t supposed to punch their admirers. I learned that if you bought anything, the vendors would ask you how much you “wanted” to pay on the receipt as opposed to how much you actually paid. This allowed you to bend some of the strictures about bringing merchandise over the border. I learned that you really, honestly shouldn’t drink the water…or eat anything washed in the water, if you weren’t acclimated to any local digestive bugaboos.

Now it was autumn and I was in Taxco. Drought ruled. There was no water in the cheap motel I’d taken. I spent the night sitting in my room’s wide, adobe window frame, watching more stars than I ever thought the sky could hold. Somewhere a dog or coyote barked. There was an answer. And another. Soon a canine symphony was traveling from horizon to horizon, speaking a wild kind of joy.

Increasingly over the last couple of weeks I’d been having bouts of homesickness. Crouched on the windowsill, feeling dusty and grubby from lack of water to wash in, I thought of autumn at home.

Leaves would be every color found on the warm side of the rainbow. The air would be sharp with frost and scented pines. Everyone would be snuggled in sweaters pulled from summer storage, still smelling slightly of camphor. And there would be lovely things like pumpkin pie, hazelnuts fresh from the tree, and apples.

I closed my eyes and relived walking through an orchard, picking a perfect fruit, biting into its tart, sweet, crunchiness.

Come morning, all I wanted was to taste a newly picked apple. So, I walked down the narrow streets of Taxco, naively thinking that there should be orchards in what I considered a rural locale.

That old man with the avocados made me mentally slap myself. I was thousands of miles away from where apples grew naturally. I drooped under my dashed hopes.

A small girl had witnessed the grumbling exchange. She tugged at the hem of my jacket and said, “Senorita, mi padre tiene manzanas.”

“Your father has apples?”

“He MAKES them?” I must have misunderstood, but with a wide, innocent smile, she grabbed my hand and pulled toward the road which led to the center of town. She chattered about how beautiful her father’s apples were. I let her lead me, curious to see how this would turn out.

It seemed my exuberant, little guide was headed toward the town’s main street.

We turned a corner and stepped out into a river of silver. Taxco is known for its silversmiths. Apparently, this was the section of town devoted to the art. Both sides of the street were lined with tables, cases, booths displaying beautifully crafted silver. In the clear, mid-morning light jewelry, utensils and sculptures rippled and sparkled. 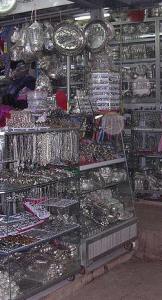 My little friend pulled my hand, impatient. Almost blinded by the reflection, I let her bring me to a stand halfway down the street. The man behind the makeshift counter gave me a huge smile.

“Eh, pequena, donde has estado?” he queried, “Little one, where have you been?”

His daughter answered that she had found a lady who was looking for apples and proudly pointed to her papa’s display.

Silver apples as paperweights, serving dishes, Christmas ornaments, picture frames, belt buckles and every other creation that lent itself to this noble metal surrounded me. I laughed, crumbling in mirth until father and daughter exchanged significant glances. A crazy tourist was among them!

Finally, I did pick out a delicate necklace with tiny, silver apples strung on an elegant chain. I thanked the little girl for helping me find apples and walked up the street to the place where northbound buses stopped. 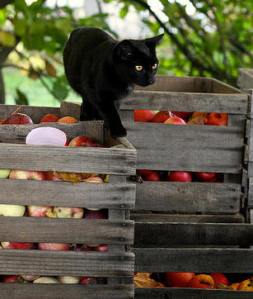